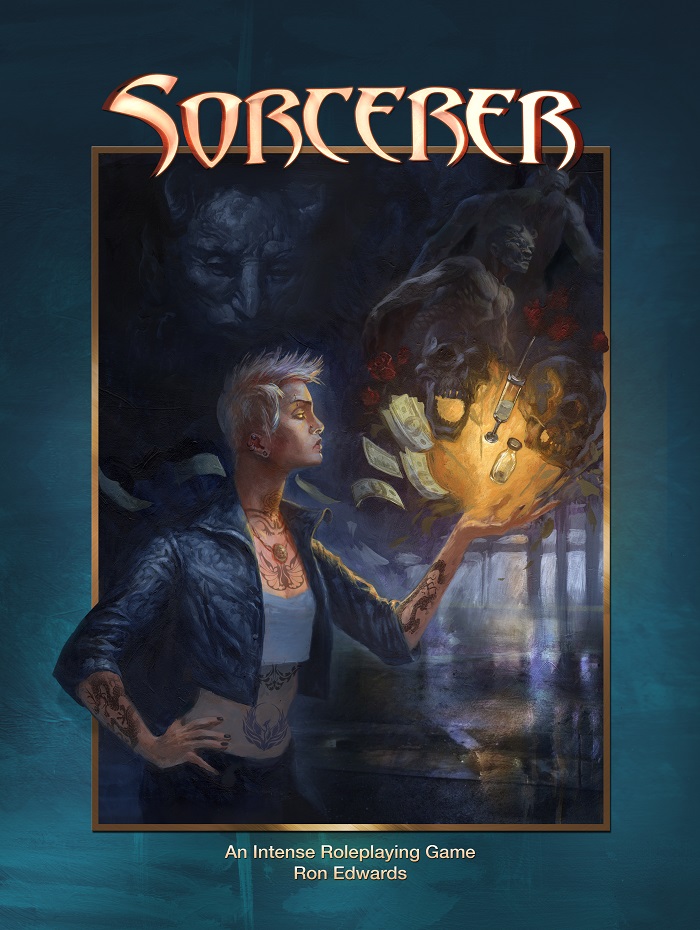 This is about Sorcerer: An Intense Roleplaying Game by Ron Edwards.

I love Sorcerer. I’ve had several abortive attempts to run it over the course of 15 years or so, but we just had a thrilling run with it that wrapped up after 15 intense sessions. I always say my favorite game is [whatever I happen to be running right now]—and I love a lot of very different RPGs across the spectrum. But Sorcerer might be the one, if I had to choose a favorite.

Often someone telling you about a role-playing game they like will try to convince you that it’s the game to replace all others. Sorcerer is not that game. It is very intense—too intense for some people.

You don’t want to spring it on anyone: Some people want their role-playing to have the GM weave a story while they engage in a series of antics. Or to give them a heroic persona within the guard rails of a game that ensures that you get to be a hero.

Sorcerer offers none of that. It is masterfully character-driven, and player-driven. Sorcerer is the game to play a driven character whose conflicts you care about—a real person who will suffer if they don’t get what they want. And maybe they don’t deserve it. But you want to play to find out.

A lot of stuff that makes Sorcerer great can be found piecemeal in the play culture surrounding other games. It helped inspire a lineage of role-playing games that notably includes Apocalypse World and its offspring—from Dungeon World to the new Avatar Legends RPG. Those close to the taproot all have some Sorcerer DNA, if you look closely enough.

If Sorcerer does stuff you like, you can also use a lot of its tech in other games. In fact, when I first read Sorcerer and Trollbabe and Sorcerer & Sword, I thought, “Wow! This is how every RPG should be played.” (I don’t believe that anymore.)

It might be like giving your character a Kicker, a backstory, or even a name in MÖRK BORG, before you fall dead the first time a skeleton looks at you. Not every technique that makes one game sing will be worth transposing to various other games.

The thing is, what makes Sorcerer work isn’t just a bunch of disparate techniques, but the alchemy that happens when those ingredients are combined through play.

Every score on your sheet is also a powerful descriptor of your character’s personality, history, skills, style, gear, and contacts.

As a consequence, every element on your character sheet implies a cast of NPCs and other connections with the world. Many of these will be made explicit in the course of character creation—most especially when you compose your diagram.

Each player authors a Kicker that will be an explicit focus of the scenario. The Kicker is defined as an event or revelation that throws the character’s whole life out of balance and thrusts them into motion, without an obvious and indisputable path that they “should” choose. In other words, it’s not a “hook” that tells the player what the GM wants them to do, nor a prompt they could otherwise ignore.

Each character starts with a diagram on the back of your character sheet, listing the names of people, places, and things that matter to them, juxtaposed in a way that creates tension for the character.

Bangs! I figured this out intuitively and recently got confirmation: The whole idea of MC moves and GM moves in the Apocalypse World family of games—especially as they manifest in Fronts and grim portents—is the progeny of Bangs in Sorcerer.

The difference between a GM move in Dungeon World and a proper Bang is that a Bang is supposed to surface the focal question of Sorcerer play, which is “How far will you go to get what you want?” A Bang is a GM move that applies pressure to your Humanity. Put another way, a GM move is like a Bang that brings the central conflicts of an Apocalypse World Engine game into focus, instead of challenging your Humanity.

The core loop of Sorcerer is the continuous flow between Bangs, your choices, your relationship with any demons, and your Humanity. This provides an intricately rich cauldron that constantly ratchets up tension like really good Dungeon World play, but in a way that produces much more personal intensity due to the diagram content being focal at all times.

The dice mechanics provide a really delightful idiom for developing and resolving the complex and dynamic chain of conflicts that arise! Sorcerer’s system for conflict resolution drives play toward hard choices and shifting priorities. And the hard choices matter, because they concern the people, places and things that matter most to you.

A Sorcerer scenario ends when the Kickers are resolved for all characters. This happens organically and without warning, and it is very satisfying. And resolving the Kickers eliminates the possible flounder of play around proliferating goals, agendas, and quests that fail to engage all the players.

Taken as a whole, this produces characters and situations that are in constant, desperate, and spirited motion. The players are never left guessing what they should do next, nor do they ever struggle with ambiguous motivation. The game brings a laser-like focus on the question, “What will you do to get what you want?” and doesn’t waste any attention or energy resolving anything else.

That is what I love about Sorcerer.

You can get Sorcerer here. The Sorcerer supplements are available here. These are not affiliate links, just enthuastic hypertext.

Commenting is closed for this article.